Well, tell us about it. Better yet, tell Jeff.

Jeff works as a farrier. It’s his job to trim the edges or put shoes on the hooves of a horse.

Each animal is an individual. They react differently to having the angle of their hoof changed with a heavy rasping file. Some horses go ballistic. Others get bored and lean on the farrier, no small thing with a thousand pound horse. Still others are pleased to see the farrier and enjoy him working on their feet.

Jeff had known this young filly since she was the size of a large dog. Over the years, they’d developed a relationship of trust and respect.

On this visit, he brought the filly out of the corral and tied her to a post. Then he picked up her front hoof and began reshaping her toe. A moment later he felt warm, soft horse lips nibbling at his stocking cap and dragging it down over his eyes.

“Stop it,” he said, waving at her face with one hand while the other was holding her hoof in the air.

It’s difficult to get the angles of a horse hoof correct when blindfolded by a stocking cap. Uncovering his eyes, he went back to work—until he felt the young horse sticking her tongue in his ear. Then she dragged the cap back over his eyes.

“Hey!” he said. This time he swatted her on the nose. 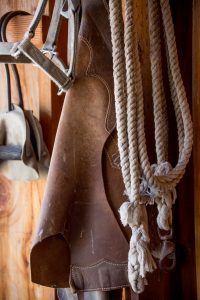 Horses are tactile animals. They show affection with their lips. For them, mouthing and licking is friendly and reassuring. In their language, it means they like you.

Once again, Jeff straightened his cap and went back to work. A moment later, the filly knocked it off his head onto the muddy ground. He sighed and left it there. That’s when he felt a gooshy horse tongue twirling his hair into saliva-slick spikes and trying to dig the wax out of his ear.

The filly had gotten what she wanted. Jeff’s stocking cap hadn’t felt right to her. It wasn’t skin and she knew it.

Gently, she breathed alfalfa breath on him. Then she softly explored the edges of his face with her lips. Finished with that, she ran her tongue underneath his shirt collar.

With a frustrated sigh, Jeff endured the slobbery poking and probing of a curious horse tongue. Finishing the first hoof, he left his hat on the ground and grabbed her other front leg. Immediately, breathing softly in his ear, she swabbed sticky saliva on the opposite side of his head.

Jeff finished both front hooves and rested his back by standing for a moment. His hair was sticking out like a hip young celebrity with gelled spikes. His thoroughly slurped face had the shiny look of a freshly glazed donut. He was really glad to move to her back feet where she couldn’t reach him with her mouth. There, he finished her hooves and put the youngster back in the corral.

Then he went home and cleaned up.

The following week, Jeff stopped in at the cafe and his story was an immediate hit among the locals. Yours truly offered to take his picture and put it on the wall…provided he was willing to recreate his spiky, shiny look.

He declined the opportunity.

So that’s the word from the cafe long table, we hope you had a good day at work.