…no one wanted to look at the dining room table’s empty seat.

It wasn’t as if Ray’s family was surprised by his passing. In his early 90s, his death was merciful, quiet and peaceful. The entire family attended as their patriarch stepped into the next realm. Those left behind, ached with a gaping hole of grief in their hearts.

For better than six decades, Ray, and his wife, Mary, presided at the family dining room table. His place, at the head, was a position of respect, rather than dominance.

Over the years, daughters arrived, grew up and married. Befo 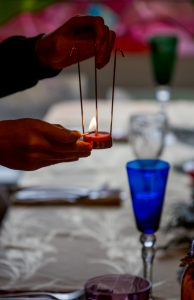 re long, grandchildren took their place in family portraits. Some time later, Mary passed and left her husband alone at the helm.

Even late into his octogenarian years, Ray preferred an active life. Each day, he’d totter down the driveway to the busy farm road in front of his house. There, he’d pause beside the pavement. Waiting for traffic to clear, he’d run—figuratively speaking—for his mailbox.

To the casual observer, he hobbled as quickly as physically possible, across two lanes of impatient traffic. He’d collect his booty and flip through each envelope and newspaper. Then, he’d wait to resume his snail’s pace back toward the house. With each successful trip, his family breathed a collective sigh of relief.

Ray was laid to rest in a cemetery overlooking the farm ground of his beloved community. For him, it was a place of roots, his roots. Afterward, the call went out to his extended family for a memorial service. That call was answered by a niece who lived across the state.

She’d spent a large part of her youth growing up around that same dining room table. As support, her husband, an almost—but, not quite—stranger to the family, made the journey. They were among the select few invited for the private family dinner.

When the out-of-town niece and stranger arrived, they entered like the rest of the family through the back door. There were hugs, much shaking of hands and many introductions. It was a happy, family-gathering time. Ray’s three daughters, aprons covering their grief, ruled the kitchen.

Before long, the call went out….”DINNER’S READY!!” …..and everyone filed into the dining room.

The nature of the gathering changed as they confronted the empty chair at the head of the table. Once again, their grief rose to the surface. Like autumn leaves circling in a stream’s gentle whirlpool, the family, eyes averted, slowly drifted around the table.

“We don’t have enough places,” one of the daughters said, eyes brimming, “someone needs to sit in Grampa Ray’s place.”

“Not me,” was the common consent, “that’s Grampa Ray’s place, I’m not gonna sit there.”

The gap at the head of the table loomed much larger than a chair and place setting. Pleading eyes glanced everywhe 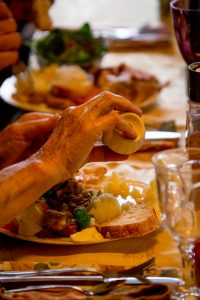 With the gaping hole in the room confronted, however temporarily. Each member of the family returned to processing their grief, their way. Tentative smiles returned. The volume of conversation rose as emotional tension swirled and drained from the room.

The stranger had barely finished making a bowl for gravy in his mashed potatoes when a pretty little girl, barely a handful of years old, leaned over and said: “You’re not Grampa Ray!”

He paused, gravy ladle hovering over his plate.

“I’m not,” he said, “I’m temporarily taking his place, but the rest of your family is here for you to enjoy.”

The girl searched his eyes, coming to her own conclusion. Apparently deciding his answer was acceptable; she turned and finished filling her plate. Then she engaged in an animated conversation with the person on her other side.

After dinner, the stranger and his wife headed out on their long, quiet journey home. Each reviewing the afternoon events in their mind’s eye. Miles down the road, she said, “I would have been really uncomfortable sitting in that chair, thank you for doing that.”

He nodded and patted her thigh while they waited for the traffic light on their way up into the mountains.

Have a Merry Christmas and remember to be gentle with those whose wounds are not visible, we’ll talk again……