…and screeches an alarm call.

Barn cats live on the edge of existence in ranch country. Their average life span is about two years. This isn’t surprising considering the number of predators that consider them a competitor or threat, like raccoons or rattlesnakes, or a consumable, like eagles, owls, bobcats or cougar. But, the heavy-hitter of barn cat predation is the coyote. For them, they’re a tasty morsel.

That’s why cats that beat the survivor odds are lucky or smart, tough and strong.

Feisty was all of the latter. Born of feral stock, she traveled our ranch for years, leaving half-consumed rodents and snakes as presents for her people to appreciate. Sometimes, she’d disappear for a couple of days. We assumed she was 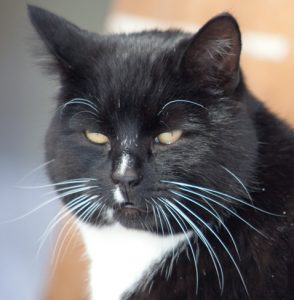 stuck up a tree or under a rock, outwaiting one predator or another.

One year during a lovely summer evening, my wife and I decided to take a walk and discuss the events of the day. For us, it’s a soft and gentle, quiet time. A family tradition where the dogs follow along, making sure all smells are in order, and Feisty brings up the rear, overseeing our whole group.

Not quite a quarter mile into our walk, Feisty plopped her rear-end on the dirt and screeched an alarm call. It sounded like someone was grinding his heel on her tail. We turned and she was sitting in the road and showing no signs of distress.

We turned and strolled ten feet.

“YOWWWLLLLL,” the cat squalled at the top of her lungs.

We were amazed. She was a veteran of many family walks and gave the impression that she enjoyed them as much as we did. We had no idea what’d caused this sudden change in her behavior.

Once again, we started off.

“YOWWWWLLLLLLLLLL!!” the cat screamed, sitting still and refusing to take a step in our direction.

Our walk beckoned. Feisty refused to budge. It was as if she, and us, weren’t allowed to travel in that direction. We were debating the situation when coyotes started yipping—directly upwind—in front of us 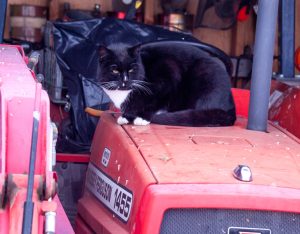 Slowly, we wrapped our human brains around our barn cat’s reality.

Feisty smelled the coyotes ahead of us. She understood, all too well, the danger to herself. What she didn’t realize was that a thirty-pound coyote is no threat to her humans. She was warning us of danger the only way she knew how.

We weren’t sure what to do. If we continued our walk, this tough cat was in no danger. She could easily slip off and find cover. Still, not paying attention to what  Feisty, a member of our family, was telling us didn’t seem right. We decided to stick together in the face of danger.

My wife turned and lifted Feisty into her arms. The cat purred all the way back to our house. I’m not sure, but I think I heard her whispering, “Thank you,” to the cat for saving us from coyotes.

We enjoyed the rest of the sunset from our porch, Feisty included. On one hand, we didn’t get our walk that night, but on the other….[wink, wink—nudge, nudge]….we weren’t eaten by coyotes either.

So, sleep well folks, and know that your barn cats are keeping an eye on things while you’re not paying attention. We’ll talk again……

POSTSCIPT: Feisty was beginning to show her age a couple years later when she disappeared on one of her walkabouts. She never returned. We hope her end was as quick and kind as that cat deserved.