…for the neighbor’s house!!!” the text read. These were not the words Rolon wanted to read while shopping better than a hundred miles from home.

He knew his neighbor’s house wasn’t far from his own. Relieved that his wife and daughter were traveling, he contacted another neighbor and asked him to set sprinklers around his house. 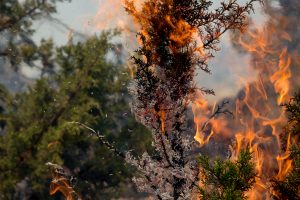 Not long before that, the fire suspect got bored with family conversation. He was visiting the region and carrying Tannerite targets in his pickup. In the middle of nowhere, he figured this might be a good time to test their explosive power.

Starting small, the explosions were fun and interesting when hit by a rifle round. Satisfied with the results, he combined targets and sent the final bullet down range. The explosion was spectacular.

He stowed his rifle in the truck and headed back to the gathering. Unfortunately, he didn’t notice the bits of flaming detritus landing in the dry sage and juniper.

It was about 4 PM and the afternoon breeze was rising in the desert.

Rolon, a state highway employee, texted a friend to ask him if the fire was a threat to the highway running through his tiny, hometown—population: 45. Hopping into his pickup, adrenalin pumping and mind racing, and he pulled out of the parking lot and hurried home.

Long used to handling emergencies on state highways, his mind ran in two directions: on one side, he compiled the information necessary to stop highway and tourist traffic for fire fighting safety and, on the other, concern for the welfare of his friends, neighbors and extended family at home.

The evening wind was rising. Traffic was stopped as the fire burned north along the highway. Government firefighters fought a pitched and desperate battle to save outlying homes and cabins. 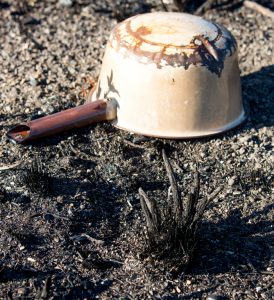 When Rolon arrived home, the first thing he checked was his house and those of his immediate neighbors. The power was on, his sprinklers were running and his crews had highway traffic stopped at either end of the fire. He stayed busy supervising his men and giving emergency crews directions to the houses of non-resident homeowners.

By dark, the evening winds had died and electricity was off. When the lights go out in a tiny and remote high desert town, all visual reference points vanish into the dusk. The fire was still burning up and down the valley. Rescue and evacuation operations were conducted by flashlight. Rolon drew maps for the state police. The road crews were attempting to turn around a truck driver whose rig was stopped in the two-lane danger zone.

A short time later, the cooling katabatic winds of evening dropped into the valley off a towering ridge overlooking town. Breathing became difficult for rescuers as smoke and billions of disturbed mosquitos coalesced in a thick, black blanket over the community. Tiny, inhaled insects sparked violent fits of coughing and sneezing in emergency workers. Flashlights and headlights were of little use in the gloom.

“I couldn’t see anything,” he said, “I figured my house was gone.”

It was after two in the morning when the fire activity died down. The town was still dark and emergency vehicles were the only things moving. Firefighters attended the most troublesome hot spots and flareups.

Armed with a hand-held flashlight and a smart phone for a real-time video to give his anxious wife and daughter a damage report, Rolon figured it was the time to check on his home. Visual references gone, he slowly made his way on foot along the roads towards his neighborhood. Waving his flashlight at passing emergency vehicles, for his own safety, he made sure the driver knew there was a pedestrian wandering in the dark. 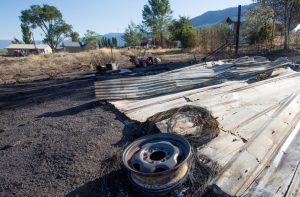 Creeping slowly up his dirt road, his flashlight picked out the storage shed where he kept his lawn mower and rototiller—it was gone, completely destroyed.

This oriented him to where his house should have been. He turned left, swinging his flashlight and searching for anything recognizable. He found nothing in the smoke and mosquito fog. Taking a few steps forward, his flashlight grazed a familiar wall. And there it was—his undamaged home.

The fire had been stopped, seventy-five yards from his house.

There’s no word yet as to the reaction of Rolon’s wife and daughter as they watched his approach through their neighborhood.  However, after their home was discovered, we suspect there may have been some digital hugs involved.

At this writing, tests are being conducted for the local District Attorney concerning the cause of this fire. The suspect hasn’t been charged with a crime. We realize that, in all likelihood, there was no intent to burn over 6,000 acres and, very nearly, several people’s homes on his day at the firing range.

However, regulars at the local’s table in the Dusty Dog Cafe don’t think the suspect should list common sense as a strong point on his resume.

Members of this tiny, desert community had been talking for a couple years about forming their own Rural Fire Protection Association [RFPA] for situations such as this.

This is an Oregon project where neighbors help neighbors by forming their own non-profit corporation to acquire surplus firefighting equipment they keep at-the-ready in their remote community.

Local firefighting activists in the community used this fire as a catalyst to move their RFPA process down the road. By this time next year, the High Desert RFPA in this remote region will have an even faster response—supplied by the locals—than they did during this event.

If you have questions about RFPAs, contact the author, he can refer you on.